I recently added a new headphone to my collection: Kingsound KS-H2, my first step in electrostatic world. Here are my impressions.

So, for a few days now I've had the pleasure to break-in & listen to my brand-new headphone: the KS-H2 by Kingsound and its dedicated M-10 amp. The M-10 is directly plugged on my Audio-GD NFB-11 (2015 version, ES9018 chip for the digital-to-analog conversion).

The thing with these new cans is that they are my first steps in the realm of electrostatic audio restitution, which is (almost) unanimously considered as the greatest technology for headphones.

That being said, you will immediately forget all that crap the second you start listening… just because this device is truly outstanding. Is that headset really better than all my other headphones ? If you except my LCD-2, I definitely think yes, but not for the reason you think. They are just so different. You listen to the same music, true, but not the same way.

In fact, high-end dynamic headphones (not speaking of planar-magnetic) can already deliver clear, neutral sound (if you don't like neutral phones, don't consider buying electrostatics). They are even better than electrostatics for lower bass and music with a strong dynamic. But they cannot compete with electrostatics when it comes to mids and lower treble. I must say my new headphones literally
smashed the competition (even my beloved HD600) for most musics I played, especially classical. And this is not only because of the quality of the restitution. The #1 thing I heard concerning electrostatic headphones is that you don't listen to music the same way, especially because the stage is gigantic. Well, I must say this is entirely true. The 10 first seconds I listened to the 'phones, I really thought music was coming from somewhere else than just around my head.

With dynamic headphones, you listen to music recorded on some stage/studio. With electrostatics, you are in the concert room/opera, watching the show. Just close your eyes and you will see the artists. And I don't just say that because I wanted to find an advantageous comparison. It TRULY feels EXACTLY like what you hear in a real concert room, and you can really appreciate the distance between you and the choirs, the cello, the organ… and that's particularly exciting when you realize how much your other headphones have been cheating on you, even though wou were thinking they had great spatialization.

Of course, there are many better electrostatic headphones than my KS-H2, but this is enough for me. Perhaps one day I'll consider buying a high-end Stax or whatever will be best then, but for now I'm sated, even more than sated! 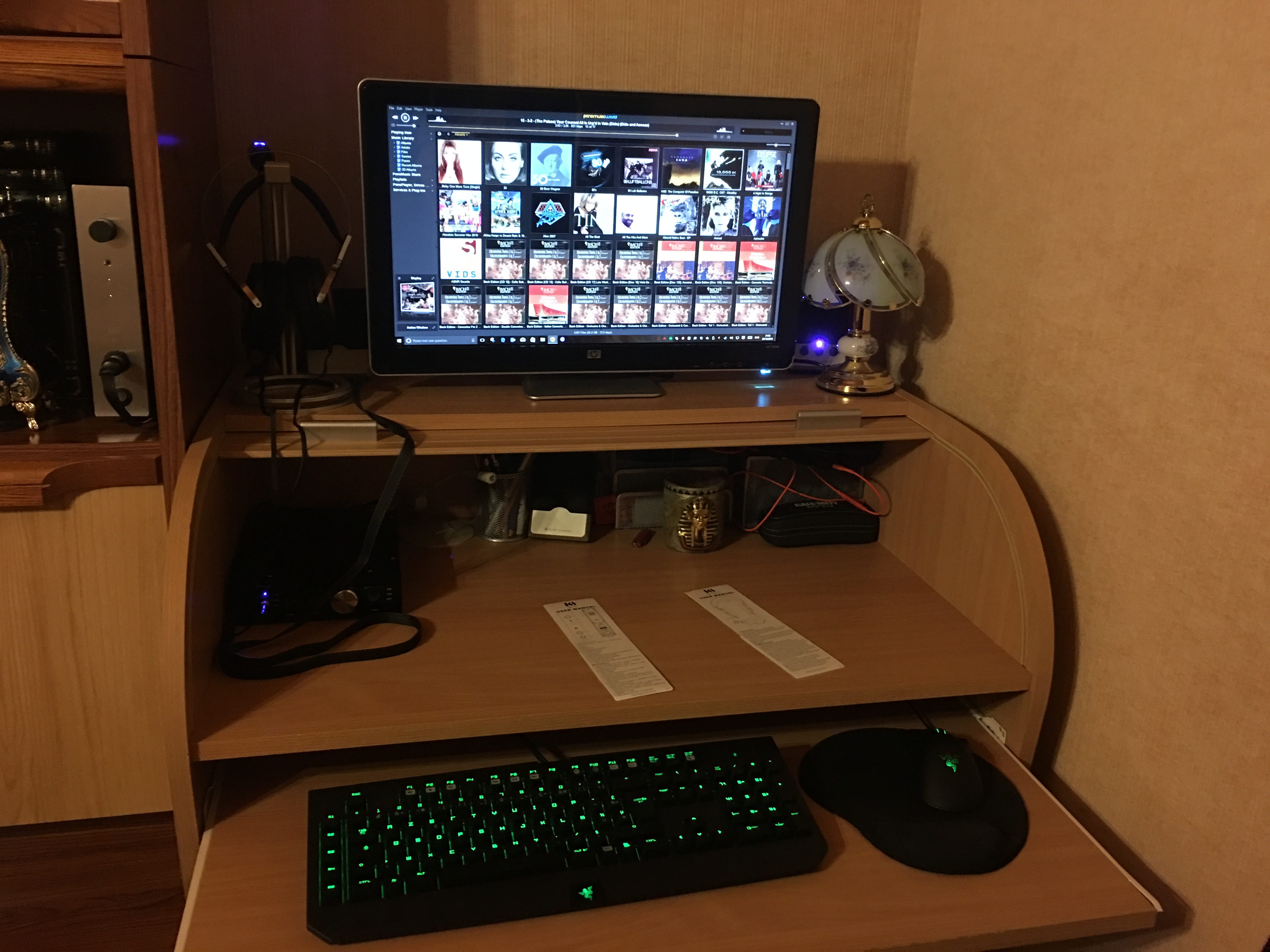 Image: The complete installation, with the DAC, amp and headphones all on the left/bottom-left of the computer screen. 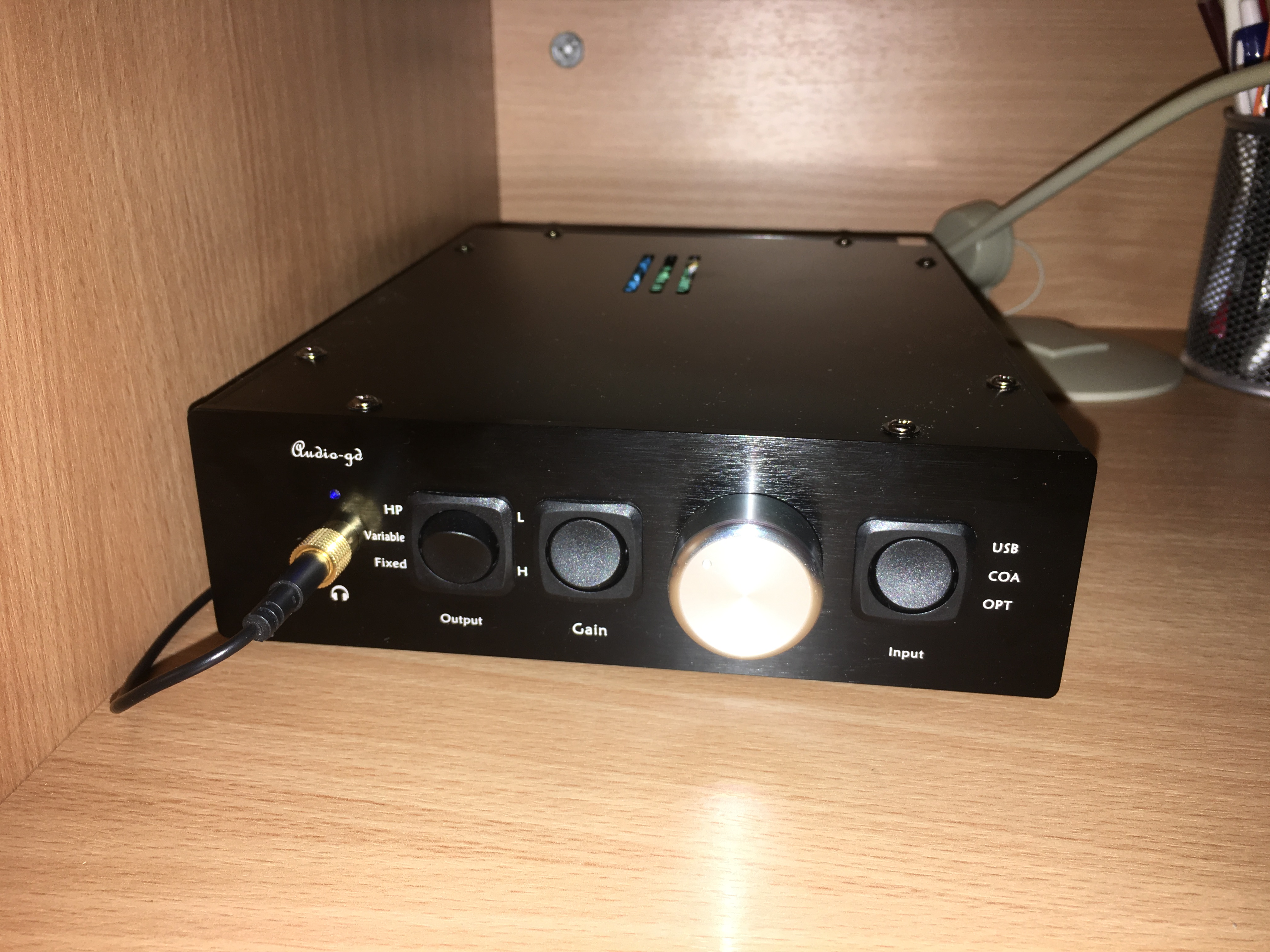 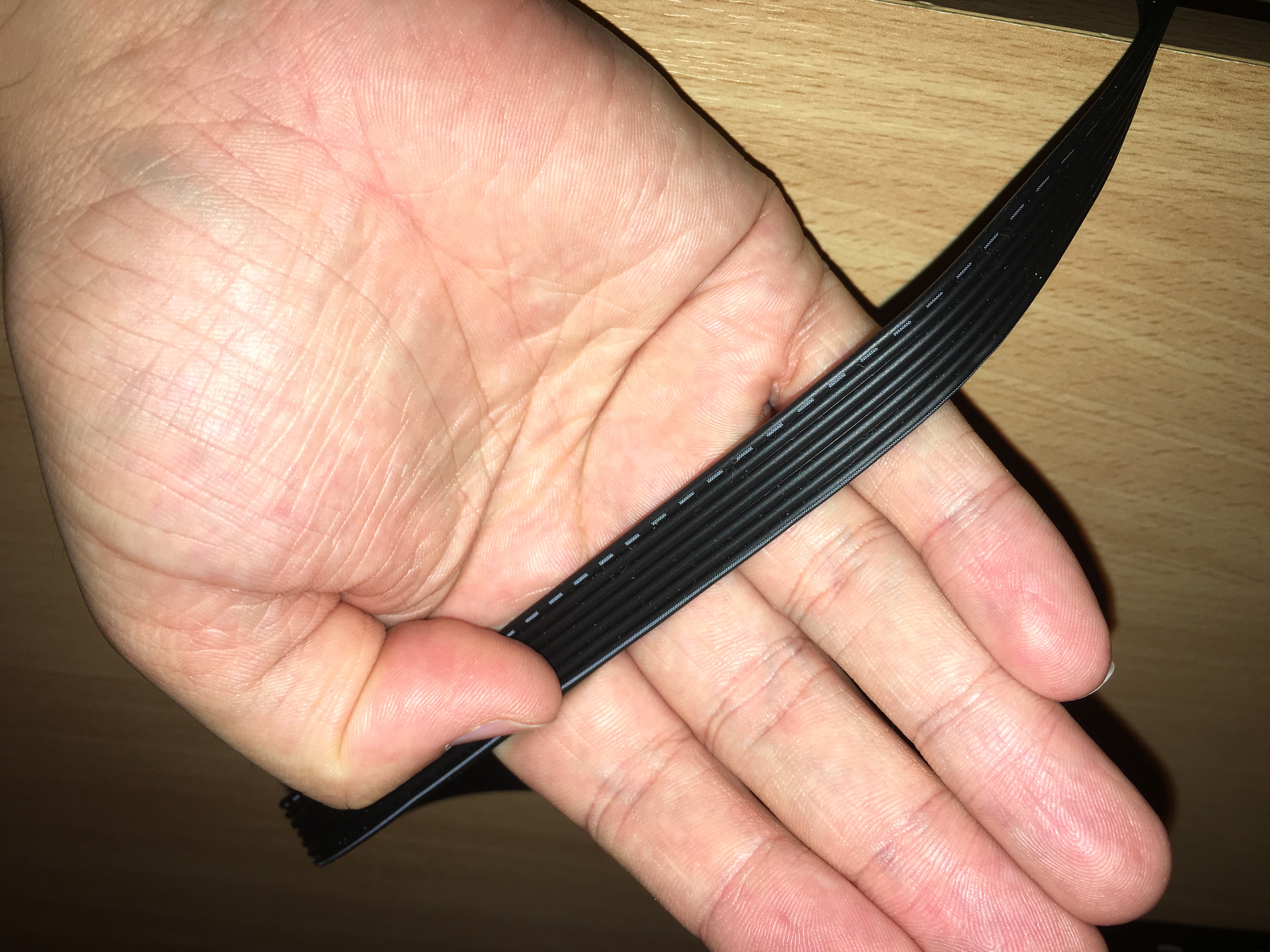 Image: The headphones input wire. Unlike dynamic/planar-magnetic headphones, these don't use a jack input. Kingsound headphones use the same 5-pin connector as Stax "earspeakers". 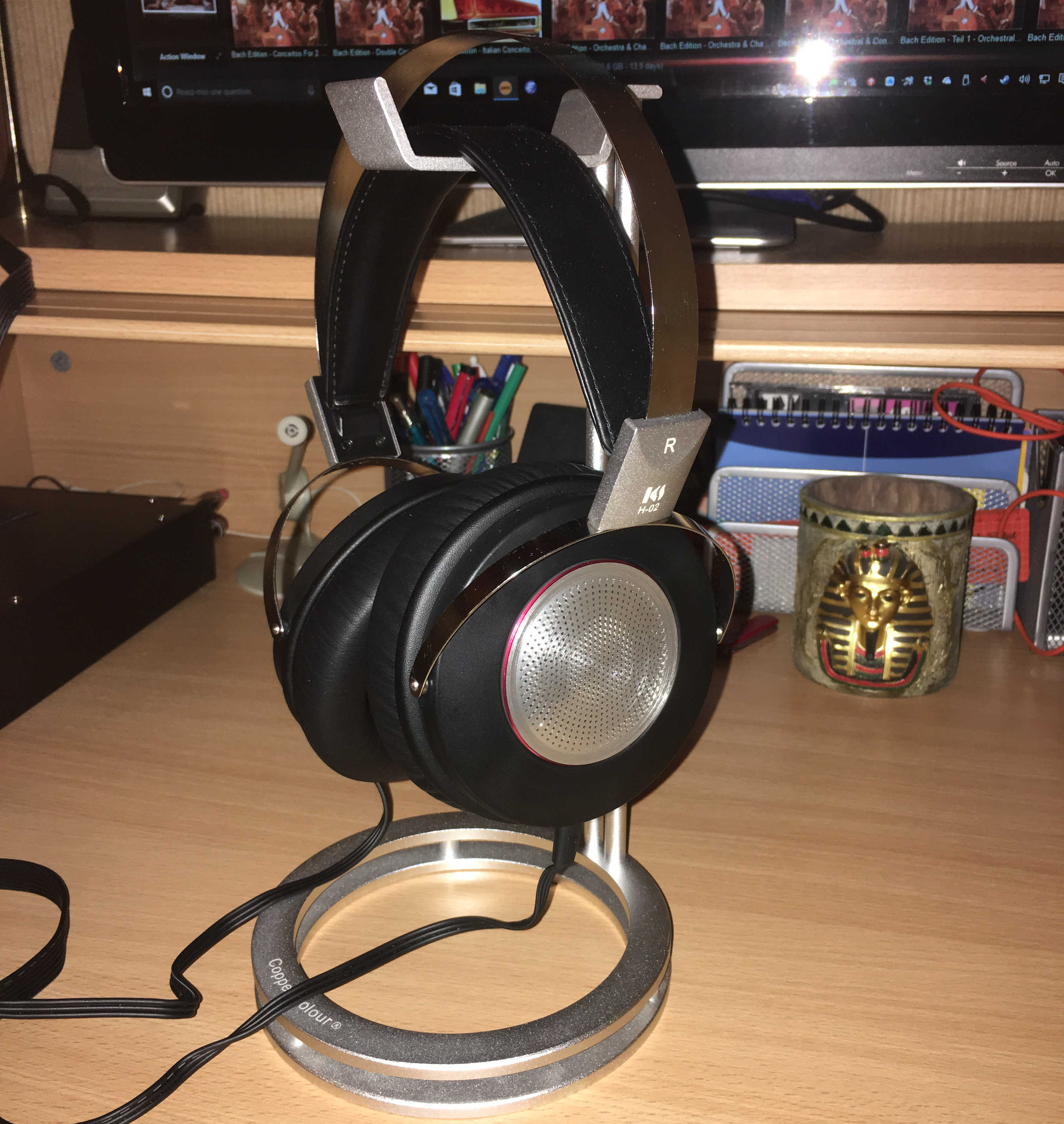 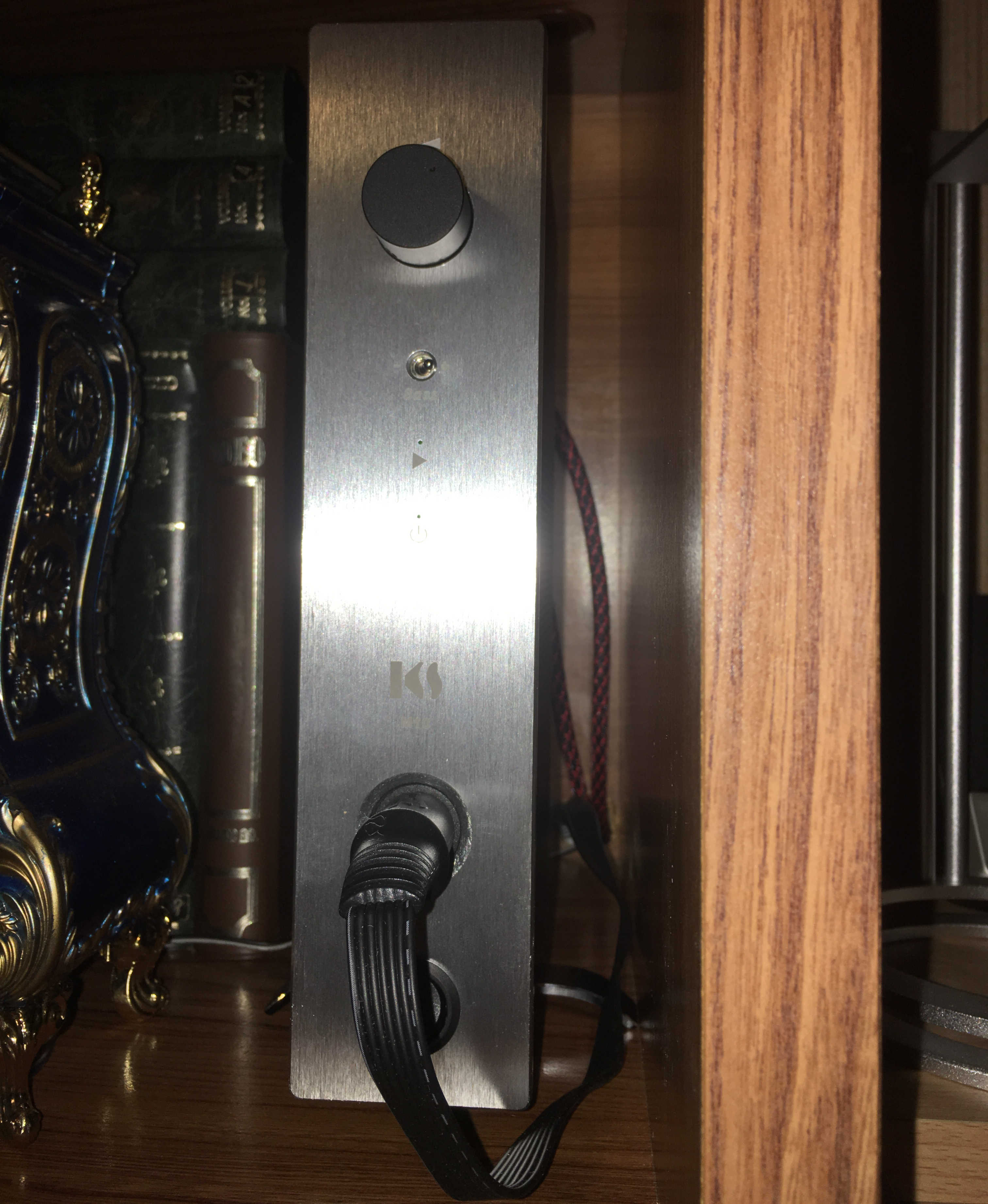